A rose is a rose is a rose—or is it? Red roses, for instance, have symbolized romance and passion for centuries. But yellow roses, which now represent friendship, often symbolized jealousy in Victorian England and America.

Flowers have had different meanings in various cultures and eras, dating back to ancient Egypt. The Victorians especially took this symbolism to heart. Because mores of the time made it difficult for “respectable” people to express their feelings, the middle and upper classes codified a language of flowers, even compiling dictionaries of floriography. A gentleman could communicate his passions with his choice of flowers in a nosegay—also known as a tussie-mussie. Likewise, the blooms a woman pinned on her dress or hat could relegate a suitor to the friend zone with nary a word spoken.

Even today, flora can be highly symbolic. Below, we look at the symbolism of some favorite flowers that you might want to keep in mind when selecting your next arrangement, botanical artwork, or floral decor. 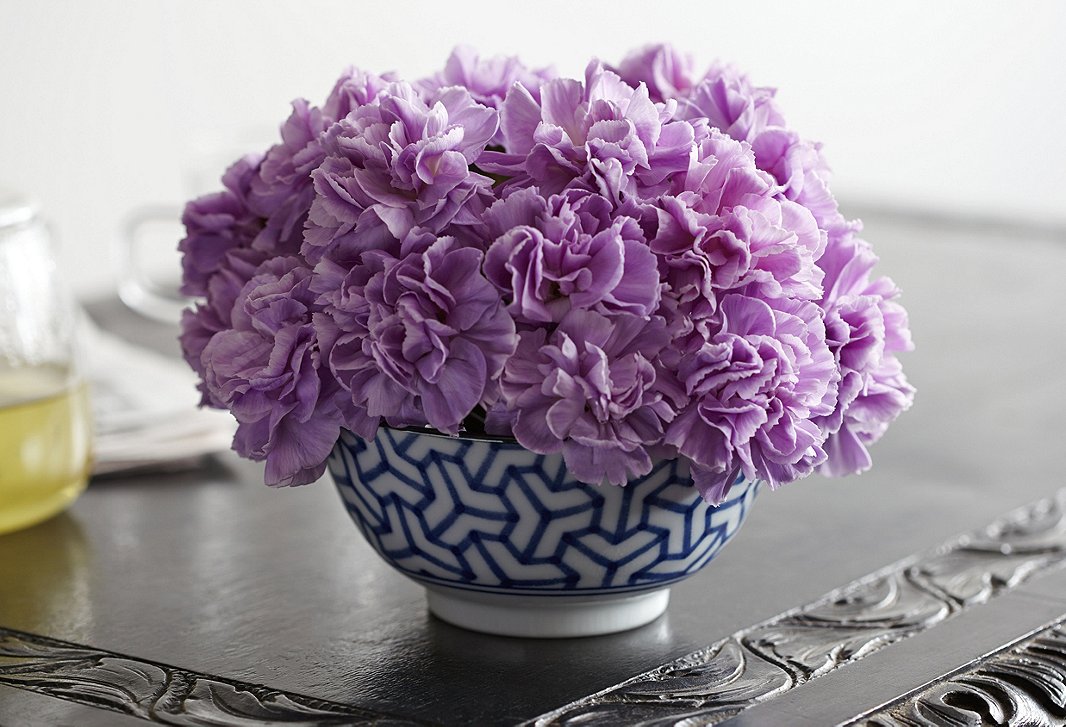 The easiest way to arrange carnations: Place the most voluptuous bloom in the center and bunch all of them together as tightly as possible. Sticking with one color and a relatively simple vessel gives them a luxe appeal.

The most popular wedding flower in China, in the West carnations are a traditional first-anniversary flower. But think twice about gifting purple carnations in France, where they’re commonly used at funerals. Victorians considered purple carnations a symbol of unpredictability. If a gentleman caller gave a woman a bouquet of red carnations, however, he was expressing admiration. Hopefully the woman in question would not be holding yellow carnations the next time he came to pitch woo, as those symbolized rejection. Pink carnations, though, represented gratitude, and white ones purity.

Also known as mums (much to the relief of everyone who frequently has to spell their name), chrysanthemums are one of the “Four Gentlemen” of East Asian art. Along with bamboo, orchids, and plum blossoms, for centuries they symbolized the noblest virtues, which is why they are so often seen on chinoiserie ceramics and traditional paintings and were a frequent subject of poems. In Japan mums are not just noble but regal: Those with 16 petals represent the monarchy, which is sometimes called the Chrysanthemum Throne. While the flower also symbolizes longevity in the East (certain mums are used to make a tea said to have health benefits), in some European countries including Austria, Belgium, and Italy they’re used primarily in funeral arrangements. Then again, in Australia mums are a traditional Mother’s Day (Mum’s Day) gift.

Cut dahlias typically begin to wilt after three or four days. Here they’re complemented with branches of berries that will still look lovely even after the flowers have been removed. Photo by Amber Fouts.

Indigenous to Mexico and South America, dahlias have come to symbolize inner strength, no doubt due in part to their hardiness. Victorians viewed them as a symbol of elegance and lasting commitment, making them popular at weddings. A notable exception is the black dahlia, which is actually a deep purple or burgundy. It has long represented sadness and betrayal, though thanks to its dramatic beauty most people today are willing to overlook that.

In Japan hydrangeas often accompany an apology. If you were given a bouquet of hydrangeas in 19th-century Britain, however, it was not a good thing. For Victorians, the showy flower symbolized vanity and braggadocio. Women who turned down a suitor often received hydrangeas in response to express what the spurned gentlemen deemed coldness. Unlike the judgmental Victorians, today we celebrate the lavish blooms as symbols of abundance.

The national flower of India and Vietnam, and in the West often conflated with the water lily, the lotus flower has been considered sacred for centuries. A single plant can live for as long as a thousand years, so it’s no wonder it represents longevity to the Chinese. Because it blooms fresh and clean above the water, despite its muddy roots, it symbolizes purity to Buddhists. (Pink lotus flowers represent the Buddha himself.) And because it appears to rise anew every morning, ancient Egyptians associated it with resurrection and rebirth.

Why has the orchid been associated with fertility and sexuality for millennia? Because an ancient Greek botanist named it orkhis, the word for a part of the male anatomy that he thought the plant’s tubers resembled. Skip ahead to the 19th century, and orchids’ relative scarcity in damp, chilly Britain, where they could be grown only in hothouses, led Victorians to associate them with luxury. It was an honor to be gifted with an orchid, and the rarer the variety, the greater the giver’s esteem for the recipient.

In Asia. the peony is heralded as the King of Flowers. During several Chinese dynasties, peonies were all but reserved for use in the imperial palaces, which led them to be associated with prosperity and honor. That’s one reason they’re so popular in wedding bouquets. Another is that in Victorian floriography, peonies represented purity as well as love won. In the West these lush flowers are considered rather feminine, but in Japan they symbolize bravery, making them a popular tattoo motif for men.

The soft, sweet scent of peonies make them a welcome addition to a nightstand. Photo by Lesley Unruh. 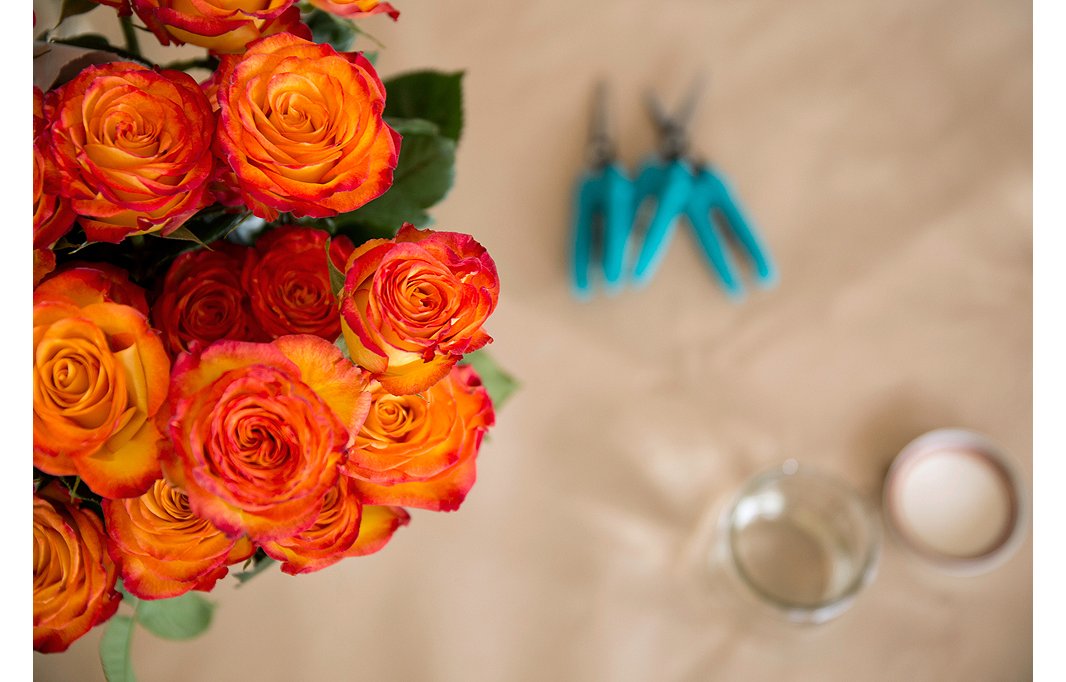 Before placing a bouquet of roses in a vase, consider trimming some to be shorter than others so that the arrangement looks fuller and more rounded, with each flower getting its due.

The rose as a symbol of love and beauty dates back to ancient Greece, when it was associated with the goddess Aphrodite. Later, roses—particularly white roses—were identified with the Virgin Mary, gaining an additional connotation of purity. In Victorian tussie-mussies, red roses spoke of romance, orange of fascination, dark pink of gratitude, and light pink of joy. But the number of roses and what stage of bloom they were in also carried meaning. A single red rosebud might have simply been a tribute to a woman’s beauty, whereas a red rose in full bloom would have suggested passion (in the politest way possible, of course), and a half-dozen blooming red roses would have been a declaration of love. 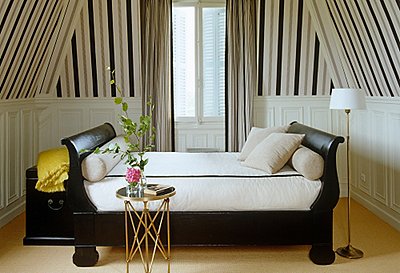 Dreamy Ways to Use a Daybed

How to make a daybed a stylish part of any decor 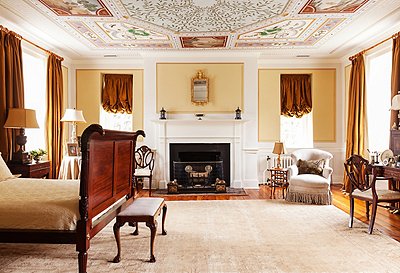 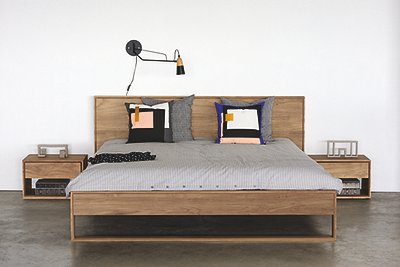 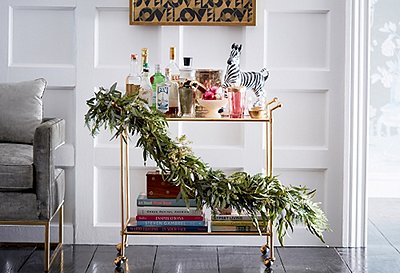 Above the fireplace, on the dining table: It’s time... 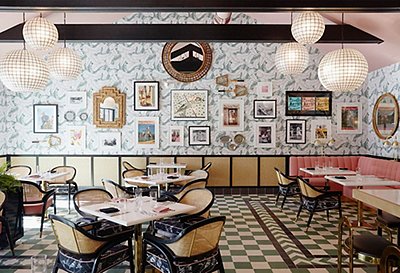 Inside a Hip California Eatery Designed by Martyn Lawrence...