When interior designer Minnette Jackson and her husband moved from New York City to a house in Nashville, they were sure they’d never be able to fill their newfound space. After seven years in the home, Minnette says, “I can tell you we proved that thought wrong!” Far from being cluttered, however, each room is now beautifully appointed with a mix of items the designer describes as “classic with a twist”: comfortable upholstery and French antiques plus contemporary art and daring doses of color and pattern.

Arriving at that point took some imagination. “I referred to it as a ‘cocoon of beige and brown’ when we moved in,” Minnette says; the house felt heavy, drab, and dated. But the structure was sound and the layout flowed, so the designer set about giving herself a clean slate to work with. “There were so many design directions I wanted to go that I ended up just neutralizing and brightening everything.” The mini refresh gave her time to mull her approach while living in the space, and to source a few key pieces in the meantime.

Although most rooms went through multiple transformations, the home’s final design ended up reflecting its surroundings. “Nashville is such a vibrant Southern city, complete with classic architecture, beautiful green hills, and a heavy dose of Southern hospitality,” Minnette says. “It is hard to design a home there that doesn’t reflect those comforts.” She drew from the leafy greens and bright blues of the Tennessee landscape, and took further inspiration from her and her husband’s deeply personal—and widely varied—art collection. 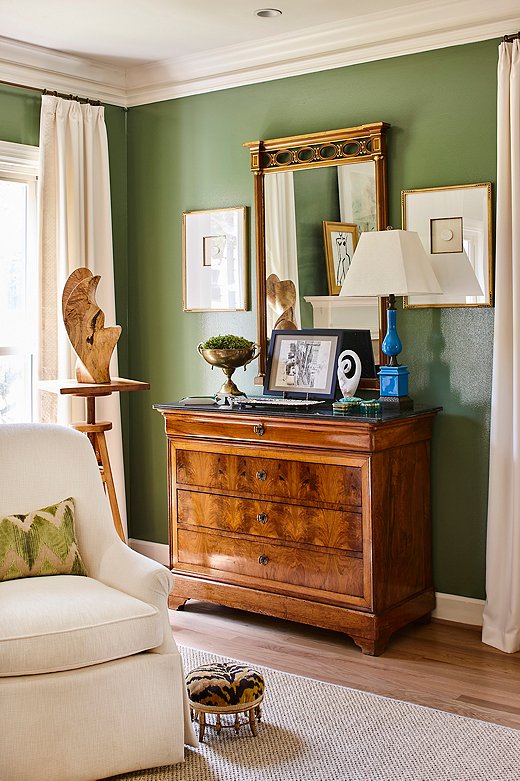 The living room is Minnette’s favorite space in the home. “During the day when the light comes in at the right time, the whole space just glows,” she says. “At night it is the coziest spot to sit and have a cocktail or catch up on the day.” A wooden sculpture by William Kooienga has pride of place next to an antique French chest and a vintage John Widdicomb mirror, one of a pair. 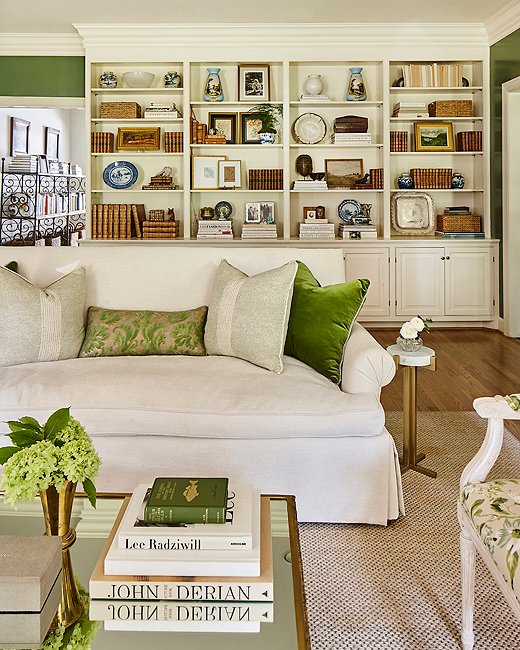 Because this room is the home’s main living area, it needed to serve multiple functions: “comfortable for easy days at home reading or working, but also elevated enough that we could have friends over for drinks and have the room feel special,” Minnette says. A mix of versatile seating (including a hand-me-down sofa that Minnette had reshaped and reupholstered in an easy-clean fabric), plenty of spots to rest a drink, and a medley of inviting patterns ensure the room checks all the boxes. 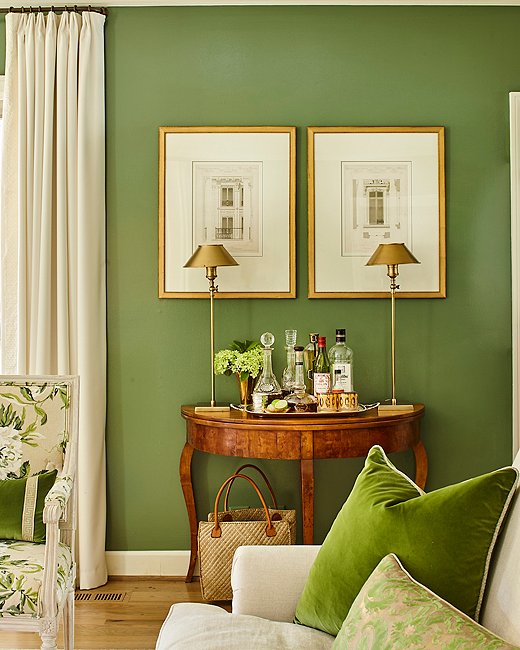 Minnette craved a color that was “rich but not overwhelming,” and landed on this particular hue (Farrow & Ball’s Calke Green) after seeing images of the green velvet-lined living room of designer Veere Grenney. Slim brass lamps (the Hayes table lamp by Chelsea House is similar) provide a cool counterpoint to an antique French demilune and a pair of French architectural engravings. 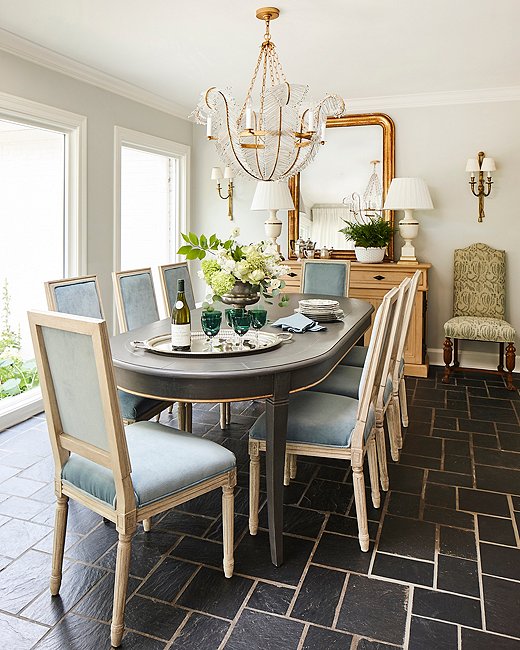 Floor-to-ceiling windows along one wall of the dining room help to bring the outdoors in. A Visual Comfort chandelier adds a touch of glamour and anchors the French Directoire-style table below.

Although Minnette and her husband have recently relocated again—this time to Minnette’s hometown of Houston—they cherish the memories they made in Nashville. “It was a little hard to leave that one behind,” Minnette says of her now-former home. “We loved to recharge there and also to entertain family and friends.” But, she says, “we’re getting settled in, and slowly but surely turning this house [in Houston] into our new home.” 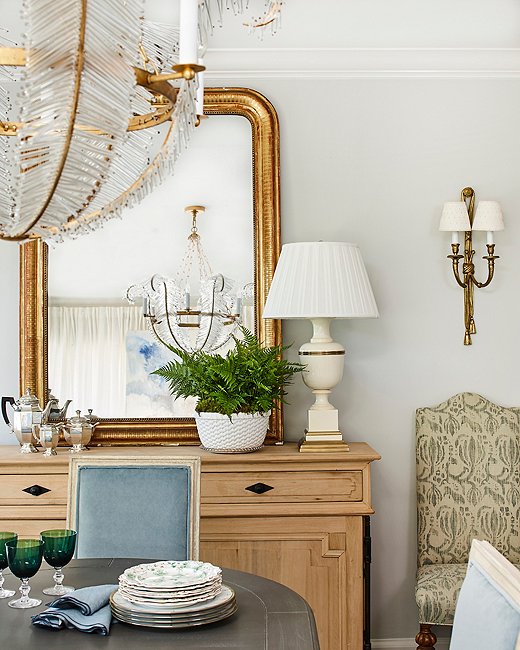 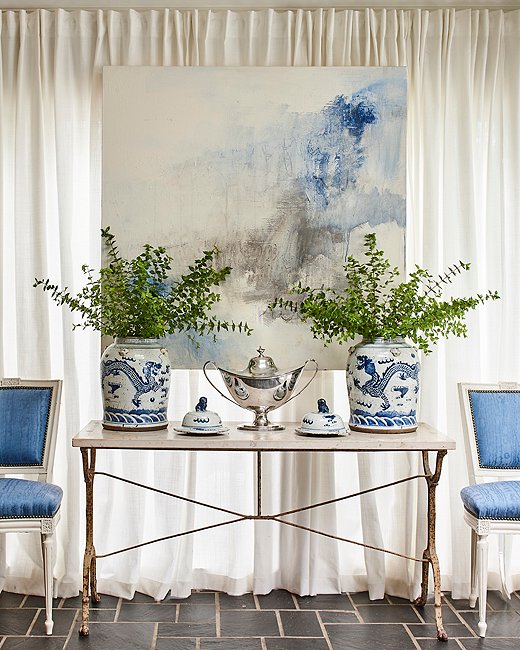 A painting by Kelley Estes picks up on the dining room’s cool blue color scheme. “I love mixing contemporary and abstract art into interiors,” says Minnette. “The right piece can add a much-needed dose of color, form, and contrast that can keep a room from feeling too predictable or stuffy.” 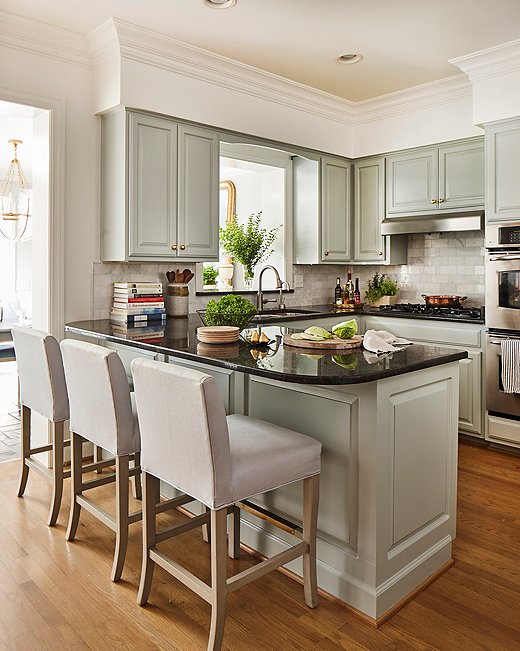 While the kitchen didn’t need a full reno, Minnette did give it a “major facelift,” ditching the faux adobe-textured walls for a crisp coat of white and painting the cabinets a pale sage green. She also replaced an ornate carving above the sink with a simple arch. The Shannon counter stools are similar to those shown above. 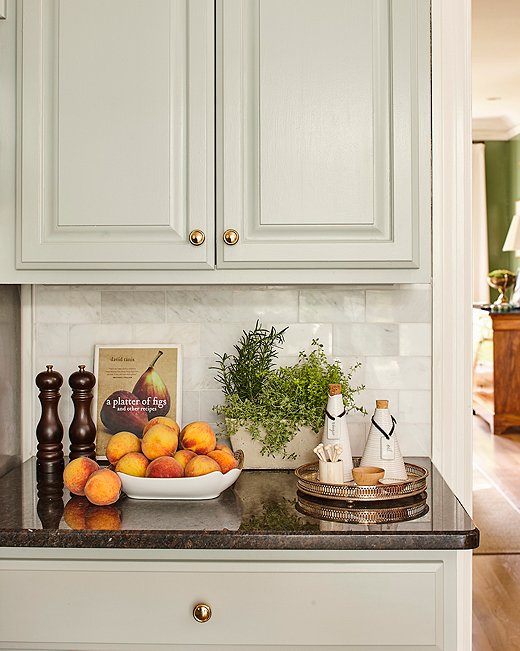 A new marble-tile backsplash lends a subtle hint of luxe texture to the kitchen. Minnette replaced the existing hardware with unlacquered brass knobs. “I like how the finish changes over time,” she says. 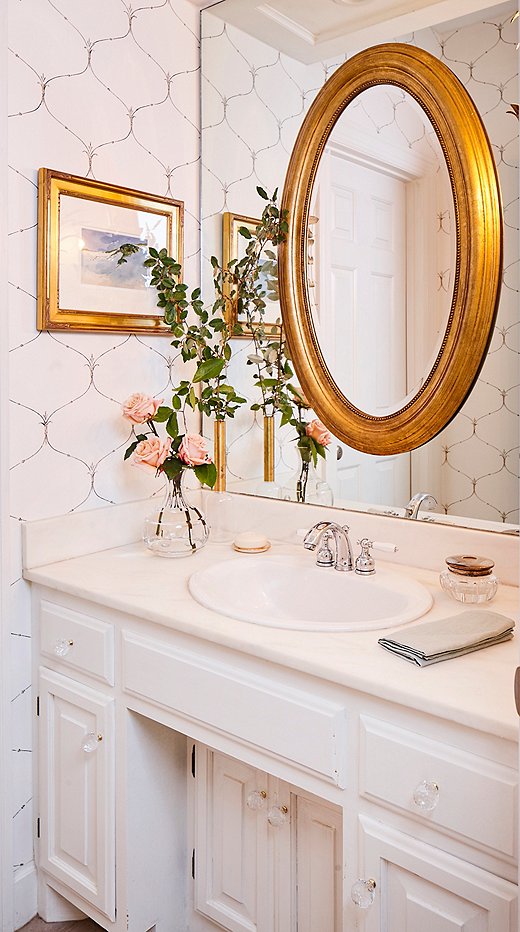 Formerly a drab shade of brown, the petite powder room now features trellis-pattern wallpaper and a gold-framed mirror hung over the existing one. “It’s still small, but now it has a bit of a glam factor,” Minnette says.

I love mixing contemporary and abstract art into interiors. The right piece can add a much-needed dose of color, form, and contrast that can keep a room from feeling too predictable or stuffy. 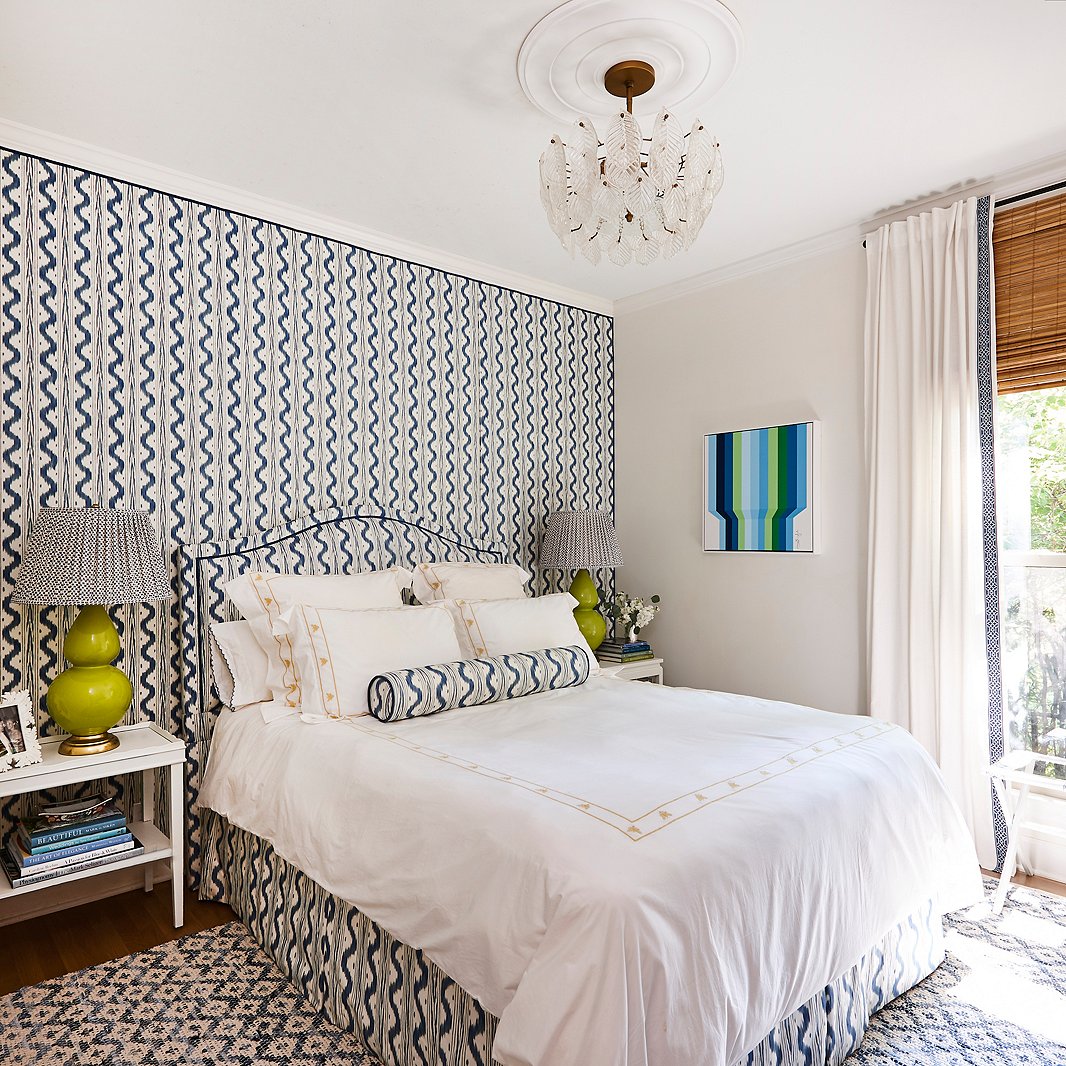 “I wanted to experiment in doing a room in an all-over pattern,” Minnette says, and the guest bedroom made the perfect candidate. Dressed in coordinating blue-and-white prints and accents of apple green, the space is now a dreamy home away from home. A op-art-style painting by Gina Julian adds a bold exclamation point. 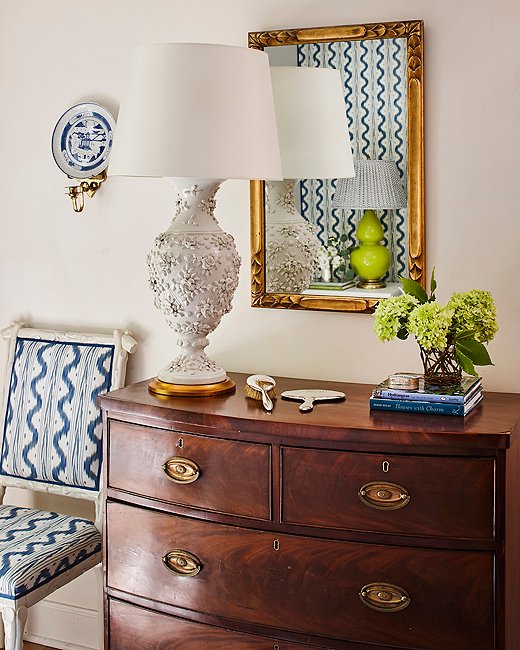 A mirror handed down from Minnette’s grandmother reflects the lively pattern on the opposite wall. The chest belonged to the designer’s in-laws, and the lamp was an online auction score. “We are lucky to have inherited several nice pieces from both of our families, and I am always collecting things I find pretty or interesting,” Minnette says.

Nashville is such a vibrant Southern city, complete with classic architecture, beautiful green hills, and a heavy dose of Southern hospitality. It is hard to design a home there that doesn’t reflect those comforts. 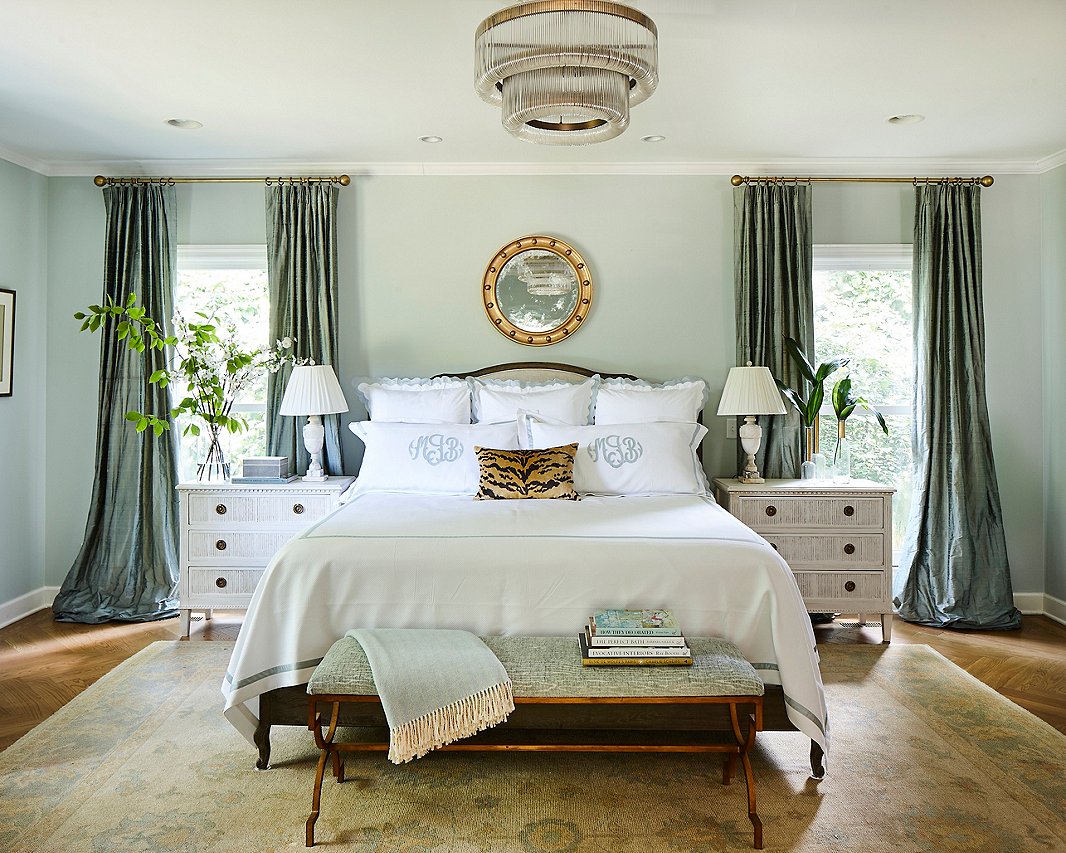 Minnette designed the master bedroom to be a respite from the noise of everyday life, and chose a color palette of “watery” blues to create that restful atmosphere. A touch of Scalamandré tiger print pops against crisp and classic Matouk linens. 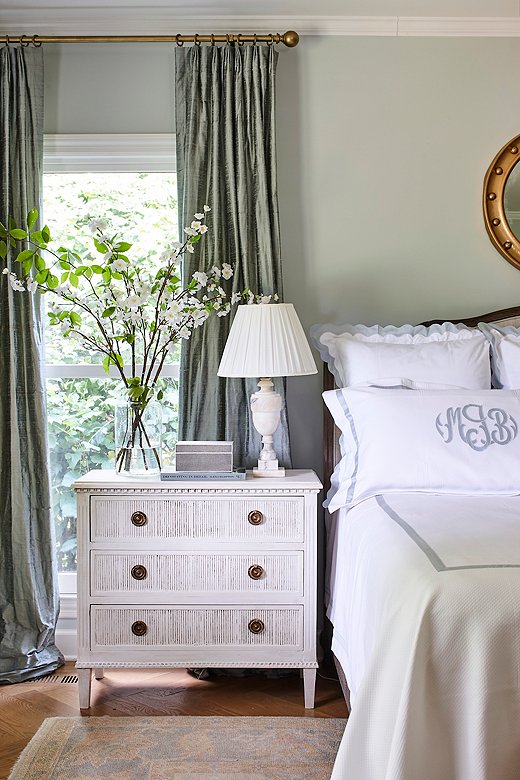 Curtains in dupioni silk lend subtle gleam to the room’s blue-and-green palette, a particular favorite of Minnette’s. “These colors come so naturally to me,” she says. “I suppose it is that they are very organic—water and greenery—two things I love to have around me. They can have a very peaceful but also energizing effect in an interior.” 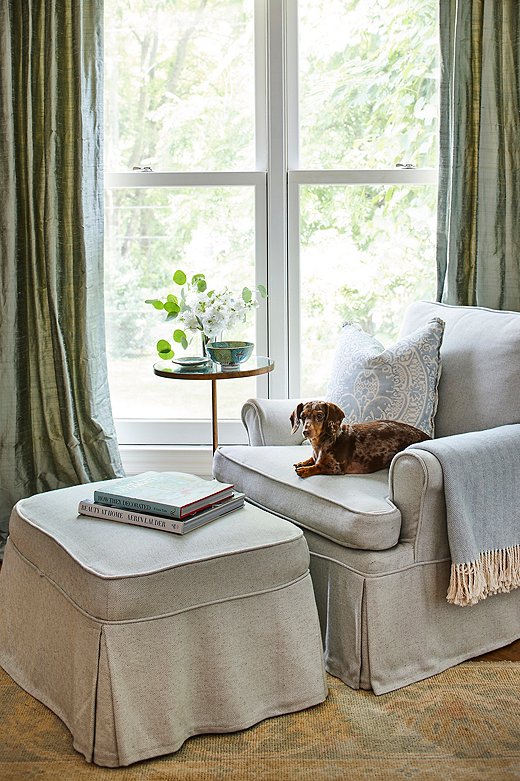 Lola the dachshund makes herself comfortable in the bedroom reading nook. “She packs a lot of personality into a little body!” 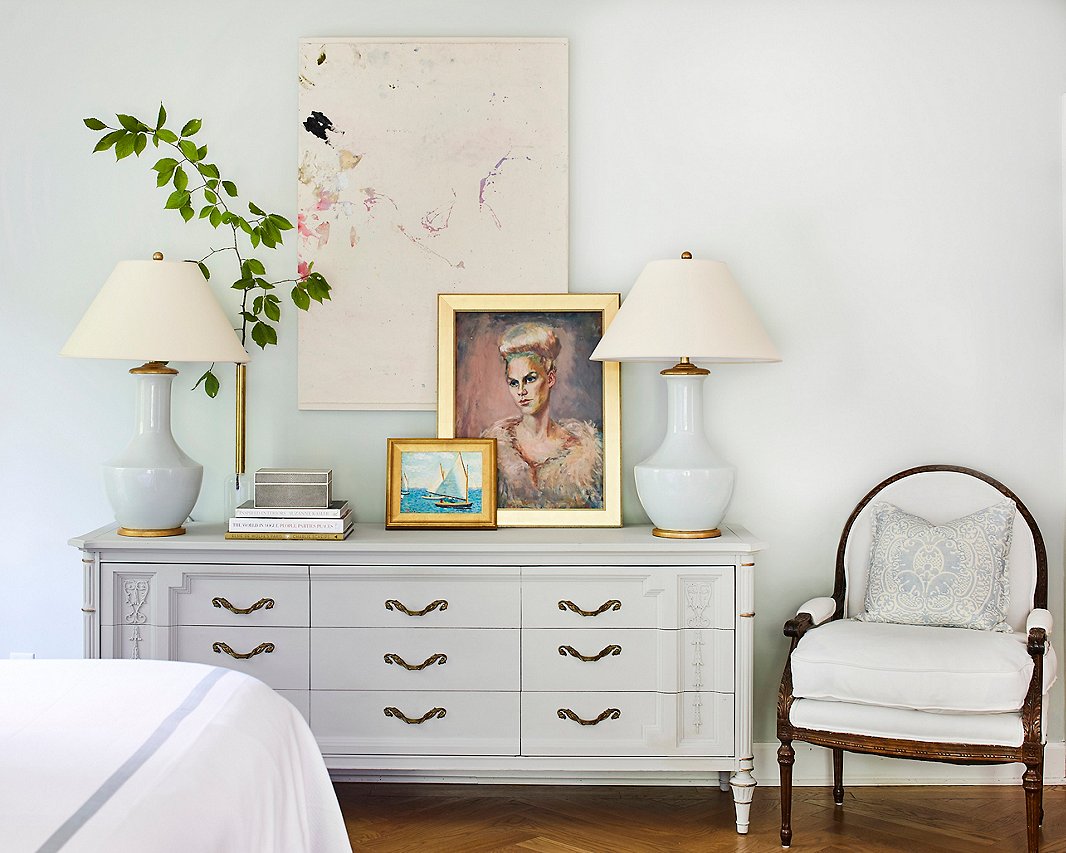 Painted in a soft shade of gray, the dresser nearly disappears against the bedroom wall. The large abstract artwork is by Molly Ledbetter, the portrait is by Minnette’s maternal grandmother, and the nautical scene is by Sam Barber, a family friend. 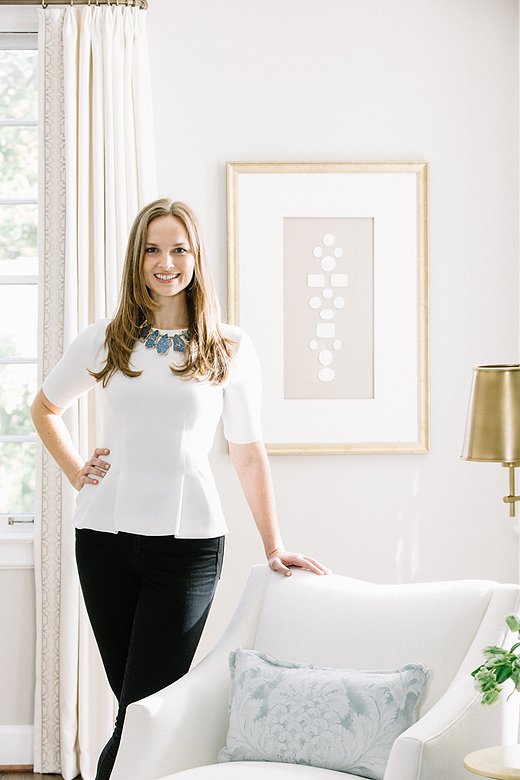 Find the right balance: “When a room is all made up of completely new items, it risks feeling a little sterile and soulless; at the same time, it does take some skill to know how to mix in older with newer pieces. I personally love working that balance, and I love when there is a story to tell about how or why you acquired a certain piece. I find I am often drawn toward antiques that have a modern sensibility to them.”

Make hand-me-downs your own: “Working with hand-me-downs can be tricky—if you don’t love a piece but are holding onto it because you feel getting rid of it might not go over well with an older family member, find a way to ask them if you can give it a new home, give it new life with a fresh coat of paint, or possibly sell it to put toward something you really love. With upholstery, if it’s a good-quality piece, you can often have it reupholstered in a beautiful fabric and have certain elements reshaped, like oversize arms, to make it feel more current. Make sure that if you are getting rid of or modifying a piece you aren’t damaging something valuable. Sometimes you just need to try it in a new spot. Often, family heirlooms can be the best touch in a room and give you a unique starting point that no one else will have in their home.” 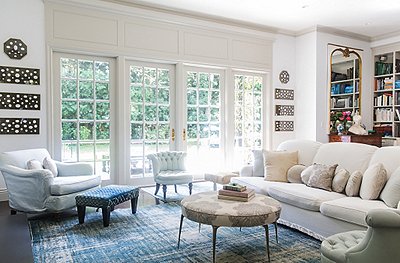 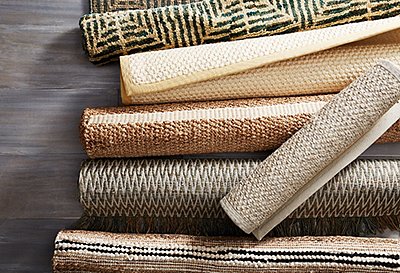 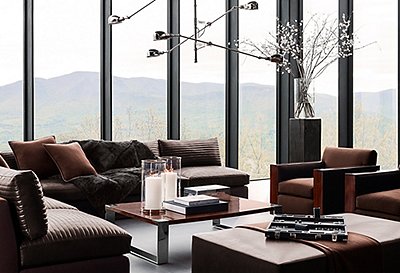 Discover the materials and techniques that set the collection apart 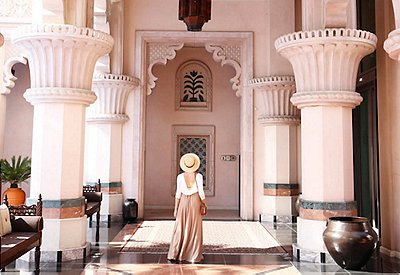 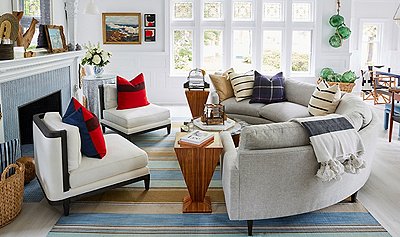 How to Decorate with Curved Furniture

Bring well-rounded elegance to your space 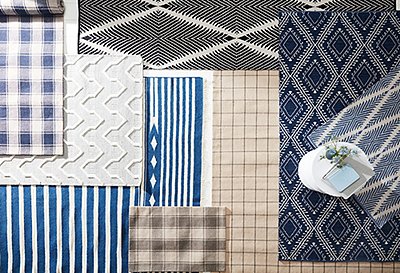 The Boston-based designer dishes on her first rug collection